In the early 2000's in most west African countries including Ghana, Nigeria and Senegal when the internet cafe was a new phenomenon, many youngsters spent most of their time at the cyber cafe surfing the internet. There was however a worrying trend that began to take wave in most of these internet cafes. The young men found darknet websites that gave them unlimited access to credit and mastercard details of people in Europe and America. They used this details to shop for clothing , gadgets from ecommerce websites like Ebay and Amazon. When shipping of the goods were not allowed directly to Africa the fraudsters would use their family and friends abroad as middle men / passage routes to receive the products and further ship it to them in Ghana and their respective countries. Most of these poor and disadvantaged youth found a gold mine in this trade and they spent almost 24 hours shopping and fishing for credit card details to scam. Others went as far as using the paypal accounts of vulnerable account holders to orchestrate this dubious activity.

Somewhere around 2004 after thousands of legitimate users of Paypal , amazon and ebay complained about unusual purchases and huge sums of money were getting lost in their accounts. These technology giants decided it was time to curb this fraudulent activity of credit card fraud. They simultaneously decided to blacklist so many West African countries from using the platform for their illicit activities. Some of the countries that were blacklisted included Ghana , Nigeria and many other African countries. Over the next decade that followed it was impossible for people resident in Ghana and the other blacklisted to make or receive payments on the PayPal platform. With many online merchants using PayPal, sometimes exclusively, to receive payments for products and services, Ghana's 24 million people, like many more in other blacklisted countries, were unable to transact business.

If you are wondering what Paypal is , paypal according to their official website was founded in 1998, they continue to be at the forefront of the digital payments revolution, processing almost 11.5 million payments for their customers per day. PayPal gives people better ways to connect to their money and to each other, helping them send money without sharing financial information and with the flexibility to pay using their PayPal account balances, bank accounts, PayPal Credit and credit cards. With about 162 million active digital wallets, they have created an open and secure payments ecosystem people and businesses choose to securely transact with each other online, in stores and on mobile devices. PayPal is a truly global payments platform that is available to people in 203 markets, allowing customers to get paid in more than 100 currencies, withdraw funds to their bank accounts in 57 currencies and hold balances in their PayPal accounts in 26 currencies.

Fast forward to 2015, the year of the digital revolution where smart phones are not seen by many Ghanaians as a luxury but instead a necessity. You should by now understand the immense role paypal would play in our cashless society. We live in a time that many Ghanaian entrepreneurs with innovative products and services would offer real value to buyers around the world and contribute to economic development locally, are now been cut off from much of the world where PayPal is a major platform for receiving payments. This is anti-business. Similarly, there are lots of social enterprises and charities that are working to improve lives and communities in Ghana and around Africa that are unable to accept donations via PayPal. All over world, online donations have powered a variety of social innovations and charity projects. Being blacklisted means many innovative social enterprises and charities in Ghana are deprived access to potential donors. This isn't progressive. This are the words of Samuel Darko, a District Rotaract Representative.


In 2013 many African youth decided to use social media and other mediums to gain the attention of Paypal. I will name two of the notable campaigns whose aim was for paypal to be brought to their respective countries. One of them is the outspoken change maker Samuel Darko whom I mentioned earlier on. He started an online petition here https://www.change.org/p/rupert-keeley-enable-paypal-in-ghana to make it impossible for people resident in Ghana to make or receive payments on the PayPal platform. His target was 5,000 signatures and was able to get about 2,486 signatures and a lot of social media buzz. The second campaign was started by a Nigerian company called Creativity Kills , founded by Neo Ighodaro and they were also able to gain 597 supporters. These initiatives were very essential proving that the new African is able to take the necessary steps for them to be heard. 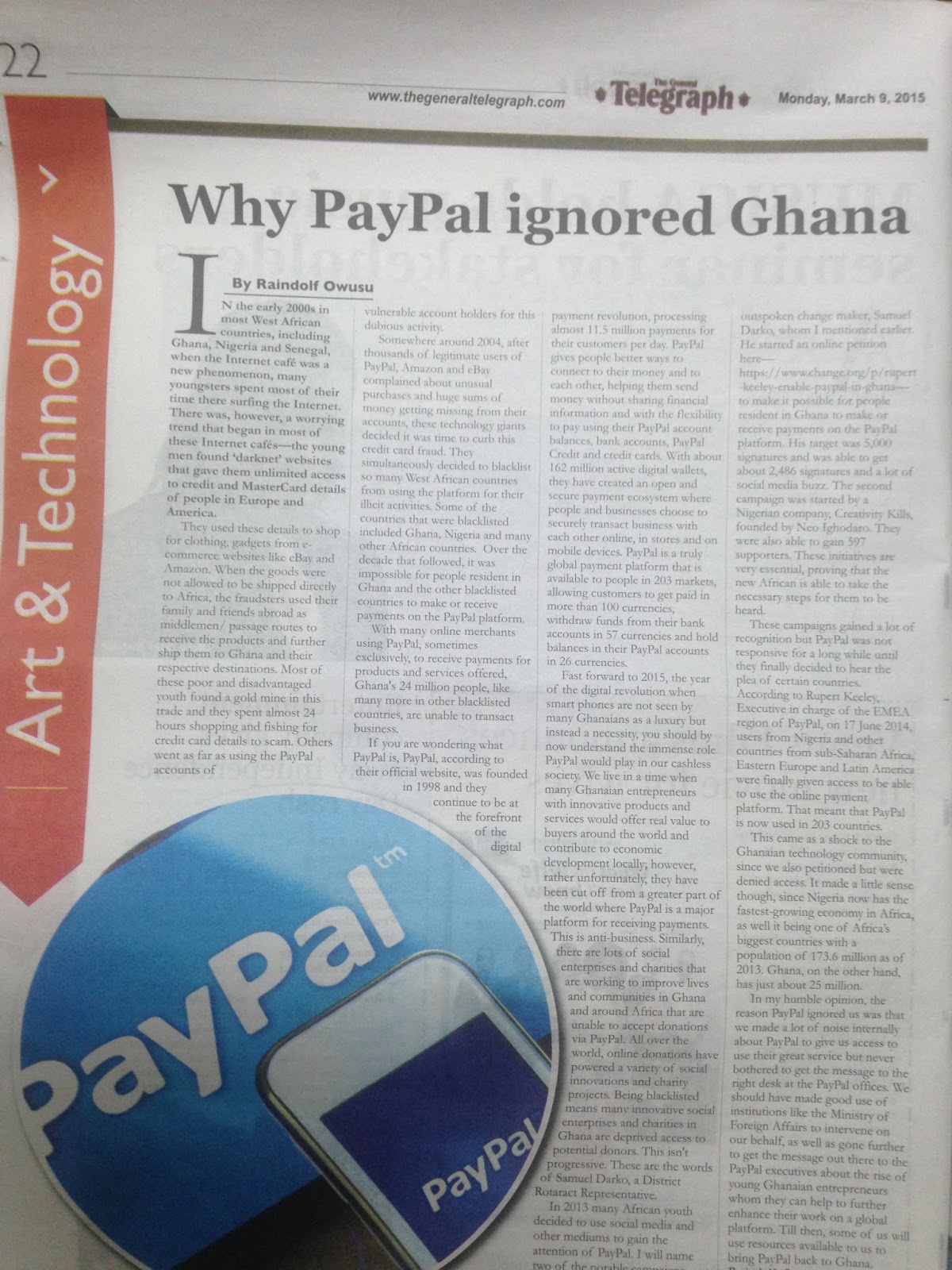 These campaigns gained a lot of recognition but paypal was unresponsive for a long while until they finally decided to hear the plea of certain countries. According to Rupert Keeley, the executive in charge of the EMEA region of PayPal, as at Tuesday 17th of June, 2014 users from Nigeria and other countries from sub-Saharan Africa, Eastern Europe and Latin America were finally given access to be able to use the online payment platform. That meant that PayPal now is been used in 203 countries.

This came as a shock to the Ghanaian technology community since we also petitioned and were blacklisted along with Nigeria but they were given access to the platform but not us. It made a little sense since Nigeria now has the fastest economy in Africa and as well one of Africa biggest country with a population of 173.6 million as of 2013. Ghana on the other have a lesser population of about 25 million.


In my humble opinion the reason paypal ignored us was that we made a lot of noise internally on only our social networks especially our social circles about the petition and as a result the message did not get to the right desk at the Paypal offices. We should have instead made good use of institutions like the Ministry of foreign affairs to intervene on our behalf and as well went further on to get the message out there to the our networks in the Diaspora about the rise of young Ghanaian entrepreneurs who paypal will further enhance their work on a global platform.

FYI:A representative of Paypal, last week revealed that, apart from South Africa, Nigeria is the second largest market for their payment solution, followed by Kenya.

“We are happy to see that PayPal has been widely welcomed by Nigerians since the launch of the service in the country last year,” the Head of Business Development Sub-Saharan Africa, Malvina Goldfeld said.

Till then some of us will use resources available to us to bring paypal back to Ghana.

This story appeared on yesterday's edition of the General Telegraph.